As the July 4 holiday approaches, we want to share a little insight into what defines RowingPad™ as a small American business. Our company was born of a passion for rowing, and a core component of our mission is honoring the heritage of this great sport in our country. 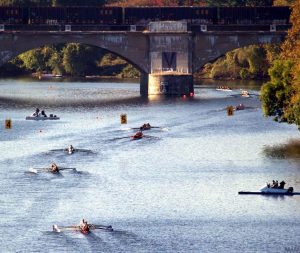 Eights on the Head of the Schuylkill

Just how long has rowing been an integral part of America’s sporting history? Well, at least as far back as 1756—that’s right, 20 years before we declared independence—when a race took place in New York between a pettiauger and Cape Cod whaleboat. (The small sailboat reportedly won with ease.) Another often-cited first race occurred on Philadelphia’s legendary racing hub, the Schuylkill River, in 1762, between six-oared barges. The first boat club founded exclusively for rowing was the Narragansett Boat Club, based out of Providence, Rhode Island, in 1838, followed in 1858 by what today is still America’s oldest amateur athletic governing body, the association of rowing clubs known as the Schuylkill Navy.

On the university scene, in 1843 the first U.S. collegiate boat club was organized at Yale, followed a year later by the first boat club at Harvard. When these two Ivy League rivals decided to meet for an eights race on Lake Winnipesaukee in August of 1852, the first intercollegiate athletic contest in the United States (August 3) was etched in history. (For the record, Harvard defeated Yale.) The Harvard-Yale Regatta is now a beloved annual tradition, taking place on the Thames River in New London, Connecticut, and remains the oldest intercollegiate sporting event.

Our RowingPads™ are Made in America

In more recent rowing history, RowingPad™, an American company producing first-rate pads for the boat and the erg, was founded by a lifelong elite/collegiate rower in Rochester, New Hampshire, in 2012. If we may be so bold, the future of rowing pads—and the comfort of the sport’s athletes, both in the boat and on the erg—would never be the same. 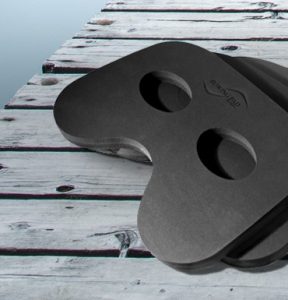 At RowingPad™, we are especially proud to produce all of our products here in America. Design, materials, manufacturing, marketing, shipping—all facets of our business take place on U.S. soil and with U.S. partners, including our parent company, Spectex.

It’s a distinction worth noting these days, especially as we celebrate Independence Day and reflect on all the reasons we are fortunate to live in the U.S.A. Many Americans support the idea of bringing manufacturing and jobs back to the U.S., however, as a recent Chicago Tribune article reported, “The vast majority of Americans say they prefer lower prices instead of paying a premium for items labeled ‘Made in the USA,’ even if it means those cheaper items are made abroad…Nearly three in four say they would like to buy goods manufactured inside the United States, but those items are often too costly or difficult to find.”

We certainly understand the dilemma. Fortunately, at RowingPad™ we have been able to stay American-made yet still offer our boat and erg pads at affordable prices. Our position as a subdivision of Spectex, an established materials engineering, design and manufacturing company founded in 2001, provides us with unique access to the polymer foams and processes like laminating and die-cutting that go into producing each one of our pads. It is important to us to make our products available to all rowing athletes, student, amateur and professional alike, as we do our small part to further the American legacy of this wonderful sport.

To share our patriotic spirit this July, take 10% off your purchase. Use the code RPJF10 at checkout.

Thanks for welcoming our American brand into the rowing community. We wish everyone an outstanding Independence Day weekend—and hopefully some quality time out on the water!